Some Words About Fountains

Fountains have historically been used as a demonstration of power and wealth. They were meant to symbolize man’s power over nature, they were symbols of a man-made recreation of a small part of heaven.

We have uncovered ancient fountains dating all the way back to 2.000 BC in today’s Iraq. Sources indicate that fountains existed in Ancient Greek cities such as Athens and Corinth as well, which is probably where Romans borrowed the idea from. Rome was infatuated with aqueducts, baths, and fountains. They were a sign of the Republic’s dominance, of order, of civilization. Fun fact, Rome remains to this day the city with the most fountains on the planet. Of course, to be fair, it wasn’t just the Western world that was infatuated with water, the Islamic Caliphates of the East also built several magnificent fountains that were a central part of the “paradise gardens”.

Our adoration for such structures remains to this day, with the pool fountain lights of the Bellagio hotel’s fountain providing one of the most breath-taking shows anyone can witness. But how do such structures actually work? The Led underwater lights part is obvious enough, of course, so we will be focusing on the various fountain nozzle types and sub types instead. 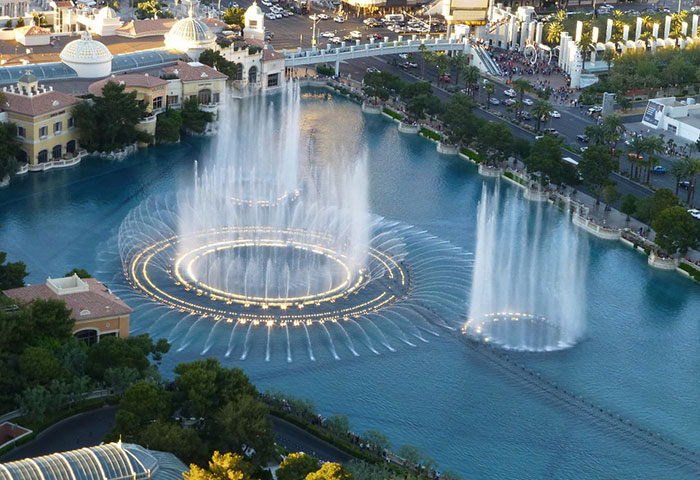 The flow of water.

The most simplistic style of pool fountain nozzle is the normal traditional flow style. It resembles the flow of water you’d see coming out of a tap or even a garden hose. While this nozzle type is inexpensive it doesn’t provide the most breathtaking visual. A much more commonly used style is the multi jet type of nozzles which produce several flows of varying intensity. They’re very easy to install and are said to be very cost effective and although they may look similar to the traditional flow style nozzles the small holes of varying size at the top make all the difference.

Another type of fountain nozzle type you’ve probably come across is the white water type, most commonly found with the geyser head sub type this nozzle provides a white frothy effect by allowing air intake into the water flow. A more recent addition to this list is the water film jet. By spraying the water upwards onto a smooth metal plate this nozzle creates a downward splashing film of water. The resulting sight and sound of the running water are both calming and delicate.

The last of the list is, in my humble opinion, the most bewitching of all. The laminar jet type of nozzles. The water pumped through those has a glass tube-like appearance and is also usually made more impressive through the usage of Led water lights. The resulting rainbow colored arcs of water make for a truly exquisite show.

about fountains , fountains , pool fountains
Share:
PREV： How to keep your fountain’s water level perfect?
NEXT： Maintenance Questions About Your Water Fountain

If you want to get our product update information in a timely manner, please fill in your e-mail message to let us contact you, we will send product information to your e-mail.